From my childhood days, Republic Day ( R day)  for me has been associated with the colourful R Day Parade and nothing bigger than that. Over the years, the kids would go to the school for the flag unfurling there and simultaneously a flag unfurling would be held in the society too where we reside, culminating in a cultural event in the evening, followed by dinner.

This year however, I had the privilege of celebrating our Republic Day in a slightly different manner. A friend informed me about a function at Amar Jawan Monument, in far western suburb of Mumbai – Borivali, being organized by Veterans, supported by the Navy foundation, Mumbai Chapter.

Lt Shreekant Bhende is credited with the resurrection of the Amar Jawan moment to its current glorious form with the help and Support from the Navy Foundation in April 2017 .  The story goes that, when Lt. Shreekant first spotted this statue sometime in  2016, it was in a dilapidated condition . The helmet on the statue was missing, its fiberglass was in tatters and the pedestal was broken at places. In October 2016, Lt. Shreekant approached the Municipal Corporation for erection of ‘Amar Jawan’ Monument and finally after consistent efforts , the Monument was erected in April 2017. Then Hon Secy of Navy Foundation Cdr. Vijay Vadhera organized the inauguration of the Monument and the same was unveiled by Rear Admiral R M Bhatia (Retd), President of Navy Foundation Mumbai Chapter.  Since then, these Veterans have been celebrating our Republic Day by placing a wreath at this monument. This Monument is located at the traffic island opposite Mary Immaculate Girl’s High School, I C Colony, Borivli West, Mumbai. 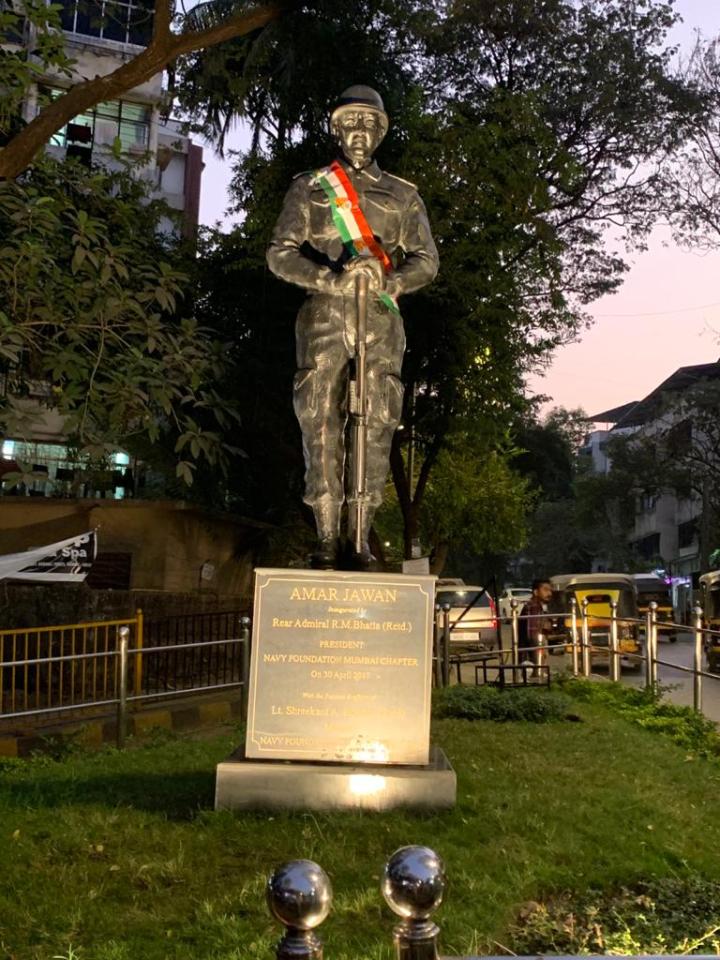 Although we reached the Lawns of Mary Immaculate Girl’s School at 6 p.m., we waited for the dusk and once it got a bit dark, we all got around the monument. Needless to say that, it needed a bit of an effort to get in. Because of its height, one had to climb on a small step ladder (of about 3 steps) and then get it into the enclosure of the monument. Despite being told that some of them could stay at the Lawns and view the wreath laying from there, everyone chose to come to the monument. Not only that, most of them climbed into the enclosure, despite their age and in some cases overcoming their  physical challenges.

All the then attendees moved to the Lawns once again and some of the Veterans spoke about their experiences associated with their time in the Armed Forces.  This was followed by dinner and we all parted. The felicitation function was attended mainly by Veterans and their family members. Barring a couple of us, there were hardly any civilians. 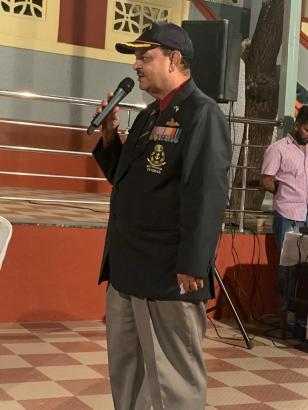 As always, it was heartening and inspiring for me to hear the Veterans speak about their experiences and the camaraderie of our Armed Forces. Also, while the Last Post being played at the Monument, I noticed two young ladies just walk up near the monument and stand till we all moved from there.

It is not that civilians may not want to be a part of paying homage to our fallen soldiers, it probably is just a matter of awareness. Although this function was supported by Mumbai Chapter of Navy Foundation, I am not sure how well this event was promoted. I happened to get to know of it because of certain Veterans that I know passed on the information about it.

It is not the duty of just the Veterans / representatives of our Armed Forces to be paying homage to our brave hearts killed in action. It is for each of us to be grateful for their supreme sacrifices. If we cannot do it always, doing it for a day may not be a big deal. I think it is not asking for too much to spare a few hours for those who sacrificed their lives for protecting our Nation.

May we never forget that ‘”Our flag does not fly because the wind moves it. It flies with the last breath of each soldier who died protecting it.”

P.S: Pictures of this event were captured by the lovely Mrs. Meena Dutt. The blog would have seemed drab without the presence of these images. Thank you Mrs. Dutt !

One thought on “Republic Day Celebration alongside Veterans”